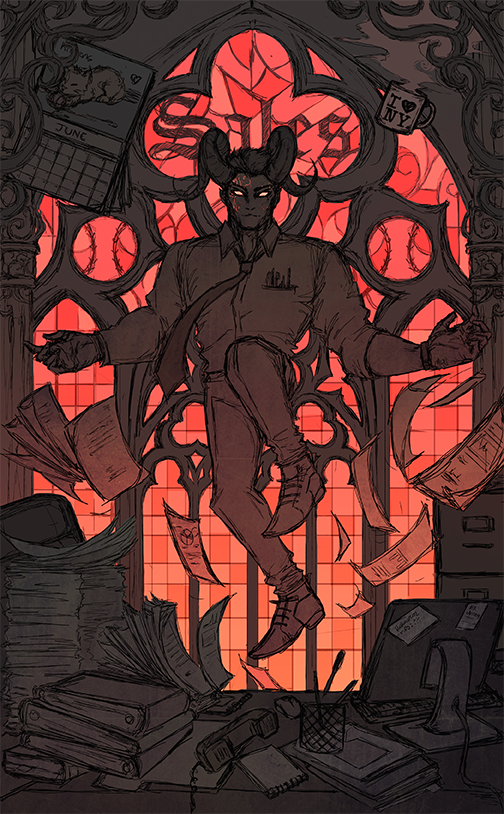 Everyone gathered together–writers, judges, a few family members. There wasn’t nearly enough space, and it got hot in a hurry. Everyone talked, filling the room with a heavy din. The illustrators were there as well, themselves every bit as nervous as the writers were.

I spoke with Eneasz, Jeremy, and Diana, shifting foot-to-foot, retaining absolutely none of our conversation. I suspect it was part of their plan, wind everyone as tightly as possible to get the most effective release of emotion.

When they opened the doors I saw Kyna’s piece first. The color of the sand a piercing red/orange that contrasted with the silver of Deacon’s flesh. Easels lined the outside of the room.  I scanned them, walking around the room from right to left, slowly, a few yards between myself and the art.

I saw Sidney’s illustration from a distance, and from afar it has a dark simplicity. Black around the borders, the center burning with infernal red. When I finally approached, I realized it was so much more. Fine sketch strokes form Nya, frozen in a moment before he explodes, raining destruction across the office. Papers and office supplies hover, frozen in place, but practically humming with kinetic energy.

Glowing behind Nya is red stained glass. The red light echoes the thin lines of power that glow on his face. His eyes are vacant, empty, pits of despair and better pictured than I could ever have imagined. Horns curl from Nya’s head, a detail I never conceived of, but one that Sidney discovered. It fits the character better than I would have come up with on my own.

Up close, the piece reverberates with details of what care and attention to detail Sidney put into the work. Easter eggs, a coffee mug, softballs, and a hate-filled sticky note directed at Nya’s foe. There’s so much in the piece, I couldn’t handle it.

And, I did a crappy job of emoting in the moment. I didn’t do a great job of conveying my awe at the piece. Sorry Sidney, but hopefully this post makes up for that failure.

I fell asleep that night, and woke up the next morning, thinking of Sidney’s illustration.

2 thoughts on “Sidney’s Illustration – The Reveal”